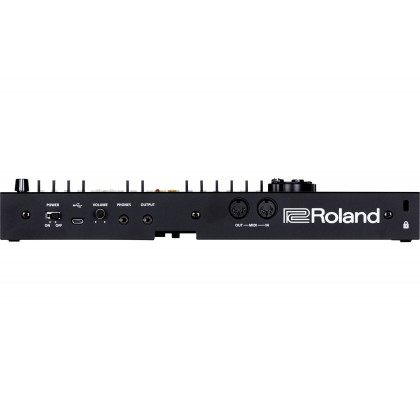 THE ICONIC VP-330 VOCODER IN THE PALM OF YOUR HAND
The VP-03 is a miniature version of the VP-330 Vocoder Plus, one of the most popular vocoders ever made. Part of the Roland Boutique series, the VP-03 brings together the worlds of synthesized sound and the human voice, using the latest ACB technology to accurately emulate the sound that made the original so influential. The VP-03 has the VP-330’s vocoder, human voice, and strings sound sources on board, and comes with a gooseneck microphone. And when paired with the optional K-25m Keyboard Unit, you’ve got the authentic VP-330 vibe in a reliable, low-cost setup that’s highly portable. There are new features too, including 16 Chord Memory setups and a Voice Step Sequencer for even more creative potential. Whether you want the classic, electro-infused “talking robot” sound or the expressive power of shaping synth sounds with the human voice, the VP-03 puts it all at your fingertips.

New Voice Step Sequencer
The VP-03 includes a new Voice Step Sequencer not included in the original VP-330, which allows you to input a single note, chord, or your voice into each of the 16 steps, with each step comprising up to six notes. The result is a distinctive rhythmic effect that brings dynamic motion to the VP-03. You can use a series of functions to change the order of steps within the sequence for unpredictable and inspiring results. Saving your best sequences to a computer via USB is easy using the backup/restore function.

New Chord Memory Function
Another new function not found in the original VP-330 is Chord Memory, which lets you play back chords using just one finger. With 16 locations available, you can quickly store and recall your favorite chords using one of the 16 step buttons. You can also create your own chords and save them into these locations, and back them up to your computer using the backup/restore function.